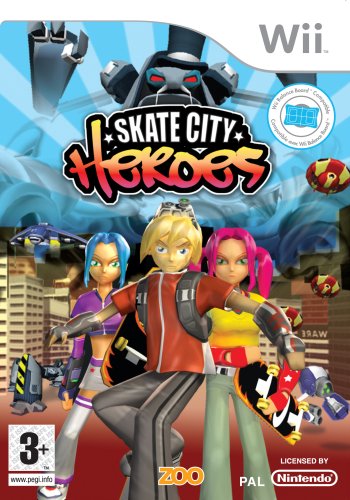 Your best skating buddy has been kidnapped by Virus, your arch-nemesis, and only you can save him. Become a skateboard master as you zip between hover cars, grind on rails, and pull sick trick combos throughout a futuristic metropolis. Hidden bonuses and items will help you impress the evil captor in order to free your friend. Your grappling laser and trusty skateboard are all you need to smack down your nemesis and restore peace to the city.

* Wii Balance Board compatible
* Ride in futuristic environments around the city grinding high on top of skyscrapers, flipping through ultra modern factories, racing between aerial trains and hover cars is just the beginning
* Choose from 6 playable characters -each with their own skills and skating strengths
* Use different combinations and attack moves to get rid of aggressive opponents
* Unique missions and side-games keep the player progressing through the story. Up to 4 players can battle it out in a variety of multiplayer modes.